Well, this has been a shit week.  My youth is being obliterated right and left!  Such legends are leaving us. 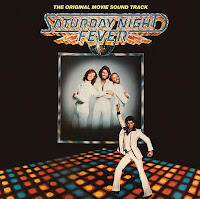 The Brothers Gibb are a part of some of the most joyous moments that I can remember.  That's saying a lot, if you know anything at all about my not so joyous life.  It wasn't until I met my husband, who is ten years older than myself at fifty, who educated me on the stellar songwriting talents of the younger, purer Bee Gees.  I'd known of Barry's collaborative effort with Kenny Rogers in the 80s on one of my favorite albums, but knew absolutely zero about their acclaim two decades earlier.

So far as I ever knew, they were the kings of dance.  They were the beat behind The Strut.  When I held that double album with the shiny black cover and sexy young Travolta on the flashing rainbow of a dance floor in my hands, I couldn't wait to get it on my little suitcase turntable and secretly shake my little six year old body around my bedroom.  It was grown-up music!  And I loved it.

Later, as a teen, it was the glue that bonded my friendship with the first real Valley Girl I ever knew.  She'd just moved up here to the Bay Area, and beneath the modern rock attitude as though she'd just walked in from a John Hughes movie set lay a girl who had the Night Fever.  At first I wasn't sure about Jackie, we couldn't be more different.  I was a girl dressed in pastels and sent out into the world, forbidden to take part in most trends of the day.  Once we discovered our love for all things disco, something took hold and it's been our only common musical love ever since.

At my wedding, I threw a curve at Jackie, my maid of honor, and had the DJ play her favorite song from the album, You Should Be Dancing.  The poor woman was embarrassed as hell when I shoved her out on the floor to show off her moves, because we had a pretty tame crowd and nobody else would join in.  Our friend Bill gallantly stepped out to join her and despite their twenty five year age difference, they were a perfect match.

In my twenties, I grew into my inner party girl, and like Donna Summer, Gloria Gaynor, Shaun Cassidy and a slew of others, The Bee Gees, including brother Andy, taught me how to let loose and live like there wasn't a tomorrow, even if only for a night. When the 70s came back around in style, I gave in to temptation and bought a pair of platform heels, five inches high.  Then another, and one more to boot - black satin, with an open heel that was tall and thick, criss crossed over my red-painted toes.  At long last, I had my Bad Sandy moment!

I never really was a girly girl.  When I reflect and search for those brief times throughout my history, they are set to this soundtrack, to these anthems.  There is something about disco that brings a girl out of her shell.  I am fortunate to have actually been alive when this revolution lived, to see the blossoming of a nation of women who felt free to dance, no partner needed.

Rest in peace, Robin, Maurice and Andy.  Somewhere, if there is an "up above," I suspect there's a fever of a whole new kind spreading itself amongst the clouds.

Posted by Kymberlie ~ WriterOfTheStorm.com at 1:39 AM